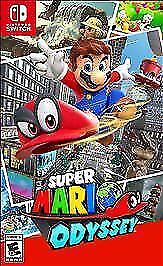 The Nintendo Switch is a hybrid video game console that supports cross-platform entertainment and can act as a standard home system or portable device. Various developers create and release single-player and party games for the Switch that span several genres and include elements many gamers can enjoy. Understanding a bit about kinds of games for Nintendo Switch that you can purchase and what they might include can help you find the ones that fit your style of play.

What genres are included in games for the Nintendo Switch?

Titles for the Nintendo Switch cover several genres, and you may wish to create a collection of both standard and online games from several of your favorites. Some of the usual categories you can look through for Switch games on eBay include genres such as:

When should you consider used Nintendo Switch games?

You'll be able to find a wide selection of both new and pre-owned games for the Nintendo Switch on eBay. If you want to pick up a collection of titles at a low price point that works for your budget, it is a good idea to check out the kinds of games you can find for sale in the used section. Some older titles that might not be available as brand-new items might show up for reasonable prices as pre-owned games that you can purchase for your Switch.

Games for the Nintendo Switch console can feature several releases that include different features you might enjoy. You can use eBay to find the edition of a particular title that is right for you:

Which Switch Games does eBay Sell?

There are a large variety of video game genres available on the Nintendo Switch, including adventure games, shooters, simulations, party games, racers, platformers, and much more. Here’s just a handful of some of the best-selling games on Nintendo Switch:

When buying a used Nintendo Switch game, there are a few things that you should consider:

Content provided for informational purposes only. eBay is not affiliated with or endorsed by Nintendo.