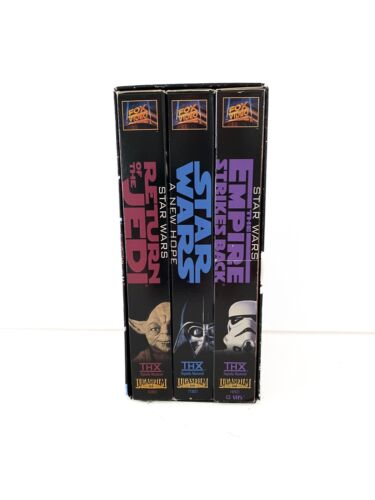 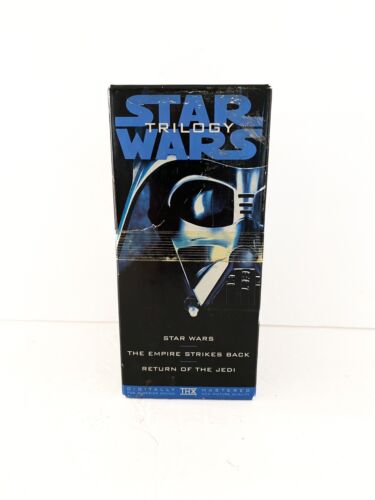 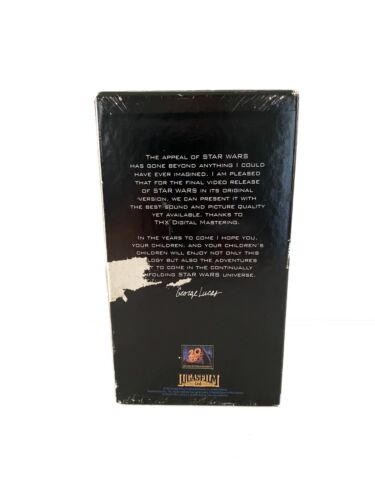 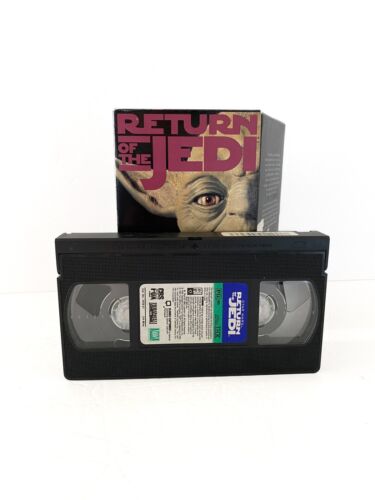 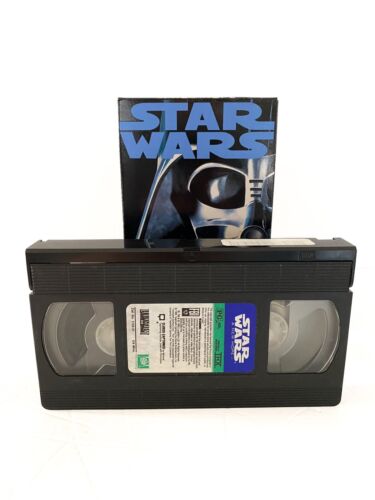 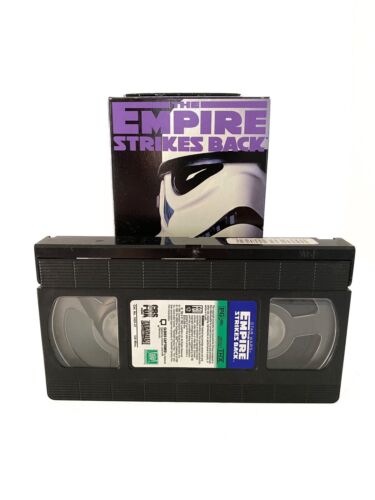 Have one to sell?
Sell it yourself

Feedback on our suggestions

Feedback on our suggestions
Report this itemopens in a new window or tab
Seller assumes all responsibility for this listing.
eBay item number:325512060069

Product Information
One of the most exhilarating and influential trilogies in the history of motion pictures, George Lucas's sci-fi spectacular continues to capture the hearts and minds of individuals throughout the world. This release contains the STAR WARS trilogy (episodes IV-VI) in one glorious package.First up is STAR WARS; George Lucas's stunning sci-fi masterpiece, and arguably one of the most inventive and entertaining films ever made. As the adventure begins, Luke Skywalker (Mark Hamill), an impulsive but goodhearted young man who lives on the dusty planet of Tatooine with his aunt and uncle, longs for the exciting life of a Rebel soldier. The Rebels, led by the headstrong Princess Leia (Carrie Fisher), are fighting against the evil Empire, which has set about destroying planets inhabited by innocent citizens with the Death Star, a fearsome planetlike craft commanded by Grand Moff Tarkin (Peter Cushing) and the eternally frightful Darth Vader (David Prowse, with the voice of James Earl Jones). When Luke's aunt and uncle are murdered by the Empire's imperial stormtroopers and he mysteriously finds a distress message from Princess Leia in one of his androids, R2-D2 (Kenny Baker), he must set out to find Obi-Wan Kenobi (Alec Guinness), a mysterious old hermit with incredible powers. On his journey, Luke is aided by the roguish, sarcastic mercenary Han Solo (Harrison Ford) and his towering furry sidekick Chewbacca (Peter Mayhew) as they run into a host of perilous situations while trying to rescue the princess--and the entire galaxy. Considered the most morally and emotionally complex of the original Star Wars trilogy, THE EMPIRE STRIKE BACK continues creator George Lucas's epic saga where STAR WARS left off. The Rebel Forces--which include young adventurer Luke Skywalker (Mark Hamill), rogue pilot Han Solo (Harrison Ford), and the beautiful but seemingly humorless Princess Leia (Carrie Fisher)--have been successful in destroying the Evil Empire's Death Star. However, the Empire's top commander, the terrifying Lord Darth Vader (played by David Prowse, voiced by James Earl Jones), is scanning the galaxy for the Rebels' secret location. After a visually stunning showdown on the ice planet Hoth, the Rebels are forced to flee, and Luke separates from Han and Leia. Masterful storytelling weaves multiple, archetypal plotlines that pit Vader against Han and Leia as he desperately attempts to capture Luke for political--and, secretly, personal--reasons. Luke, meanwhile, finds himself under the tutelage of the tiny but powerful old Jedi Master Yoda, who teaches him the ways of the Force and warns the impatient but talented student against the threat of the Dark Side. Greek tragedy meets a philosophical hero's journey in EMPIRE, a remarkable sci-fi epic in which the performances are as powerful as the spectacular special effects.The third and final chapter in the wondrous STAR WARS saga is RETURN OF THE JEDI. Luke (Mark Hamill) must save Han Solo (Harrison Ford) from the clutches of the monstrous Jabba the Hut, and bring down the newly reconstructed--and even more powerful--Death Star. With Solo imprisoned, Luke accompanies his faithful droids R2D2 (Kenny Baker) and C3PO (Anthony Daniels) in a rescue bid, with Princess Leia (Carrie Fisher) and Chewbacca (Peter Mayhew) also lending a hand. After they valiantly disentangle their friends from Jabba's clutches, Luke returns to his Jedi Knight training with Yoda. Meanwhile, the Rebel Troops amass in an attempt to see off the impending threat from Darth Vader (played by David Prowse, voiced by James Earl Jones) and his new Death Star, with the operation being lead by Han Solo. But Luke must face Vader himself if he is to become a true Jedi Knight, and as he enters into a spirited battle with his light saber-wielding enemy, some surprising revelations await the young warrior.
Product Identifiers
UPC
0086162060939
eBay Product ID (ePID)
3151176
Product Key Features
Rating
PG
Studio
Fox Home Entertainment
Language
English
Actor
Harrison Ford, Mark Hamill
Edition
Box Set
Genre
Sci-Fi & Fantasy
Additional Product Features
Film Country
USA
Format
VHS
Seller assumes all responsibility for this listing.
eBay item number:325512060069

Seller collects sales tax for items shipped to the following provinces:
*Tax applies to subtotal + shipping & handling for these states only

Better get it on VHS while you can!

I'm sure most fans of star wars are aware of George Lucas' infamous "Special Edition" edits that rendered classic scenes from beloved films nearly unwatchable. Luckily, these classic films were released prior to these changes on VHS format. If you are a true fan of star wars or even of classic cinema who feels that CGI "improvements" are completely unnecessary, Buy Star wars on VHS while you can. The rich cinematography, character development, and story that made Star Wars a cultural phenomenon is present on this format alone, not on DVD as of this review. Until Disney steps up and re-releases the original trilogy on DVD, VHS, you're our only hope.

Nostalgia in the palm of your hand

I had this exact same box set in the movie drawer of my house growing up. It then graduated to an on the shelf item as my love for Star Wars grew. After my parents split up I wasn’t sure if the box set survived the moves and shuffling of items. I thought it had been lost, but recently mom said she thinks she still has it. I have since moved far from home, and wanted a set for my own collection. It makes me smile to see it every day flanked bu some Star Wars lego sets and other collection pieces. Couldn’t be happier with my purchase and look forward to the crackly unmistakable sound of a vhs movie driving my kids nuts.

I recall watching the RotJ when I was younger, but it was the EDITED version, I realized this after doing some reading online. Why'd George have to make all these edits?! Couldn't he just leave it alone. I bought this 1995 VHS edition because it was the last trilogy collection to NOT to be EDITED by 'ol George. After watching the ORIGINAL trilogy I could finally see why the old school Star Wars fans were so disappointed with the newest additions to the franchise. Unfortunately, despite the entertaining content on these tapes, and for being new and unopened, these tapes DID NOT age well! With that said, it's NOBODY'S fault; these tapes are just OLD! There's the typical screen flickering and twitching that VHS tapes are known for, I wasn't surprised. Nevertheless I could look past the flaws and watch a piece of history.

The Force Is Strong With This VHS Collection

The BEST thing a hardcore Star Wars fan could buy because it's the unedited 100% original trilogy with NO updates! It'd be great if this set was released as a special edition boxed DVD set because VHS tapes are getting more outdated.

This is the last gasp of the original vision of George Lucas's epic Star Wars that was introduced to the world in the late 1970s. For all its flaws and limitations this is the version that started it all. No McClunky here-Han shot first. If you've got an old VHS player and you love Star Wars this needs to be in your permanent collection.

Back to home pageReturn to top