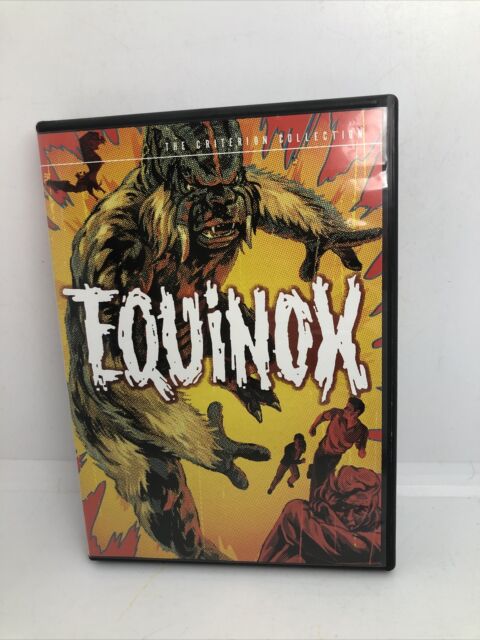 Details about  Equinox (DVD, Criterion), dvd movie only, no case, no insert

See all 10 reviews
Equinox (DVD, Criterion), dvd movie only, no case, no insert

Feedback on our suggestions - Related sponsored items
Report item - opens in a new window or tab
eBay item number:
402645537908
Seller assumes all responsibility for this listing.

I love old cult and horror movies as much as the next guy, probably more. I grew up with the creature features every Saturday. As a kid in the 60's and 70's I used to collect all those great horror magazines and was introduced to "Equinox" through these. Having never seen this movie I was rather excited to see that it was now out on DVD and that I now finally have the opportunity to see it after all these years. I have now seen it. I'm sorry but this movie flat out stinks. After my 30+ year wait to see it I am so disappointed. It's like a bad Harryhausen to say the least. It uses very jerky stop motion creatures such as a giant squid that destroys a cabin (in of all places in the middle of the woods), a giant gorilla like thing with bad dentures, a green giant caveman, and a flying red demon. There is also a demon who conceals his identity as a park ranger and he follows and harasses our heroes through out the picture. He introduces himself by the name of "Asmodeus", which means "devil" according to one of the characters. Good plan. Check out the way he "makes out" with one of the girls, that's pretty nightmarish. The acting is bad to amateurish. Take your chances on this one. I got to put this one up there with Santa Claus Conquers the Martians. For those familiar with "Something Weird Video" movies, it kind of reminds you of those fliks. I'm not out to rain on the fans of this movie, every cult movie has it's loyal followers and I respect that, I'm just so disappointed with what I saw.

The invisible barrier between good and evil!

Four friends, David, Vicki, Jim and Susan, head out into the woods to visit David's professor, Dr. Waterman. They find Waterman'home destroyed, the professor missing, and a mysterious book. It soon becomes apparent that in meddling with the book, Waterman accidentally opened a portal to another, hellish dimension, and now the demon Asmodeus (posing as a park ranger) wants to acquire the powerful book. The four friends must fight against a variety of ghoulish monsters sent after them by Asmodeus, and eventually Asmodeus himself, in order to make it back to civilization alive. Often considered one of the best-worst movies of all time, Equinox was a student film made by a young Dennis Muren which producer Jack Woods picked up for cinematic distribution, casting himself as Asmodeus and shooting some new scenes. On the one hand, this seems like a strange movie for Criterion to release, especially in a two-disc set, however despite its ineptitude it features some charming stop-motion animation for the various monsters (and some impressive forced-perspective shots to turn an ordinary stuntman into a blue-skinned giant) and it's also certainly worthy of being preserved if only because Dennis Muren and his friends had such a piddly budget to work with that it' a miracle they even had a completed (albeit rough) film, even before Jack Woods came along. Criterion's DVD of this film has the works. On the first disc there are two versions of Equinox. The first is the Jack Woods-produced, somewhat redone theatrical release most film buffs know of or have seen. The second is a true treasure, though. It's Muren's original, unaltered cut of the film from before Woods reedited it! Complete and uncut! While they don't differ overmuch in terms of story, the pacing and order of some scenes is different. Most noteworthy is the fact that in Muren's cut, the character of Asmodeus is not present and Jim is possessed rather than murdered and replaced. Both versions of the film have insightful and fun audio commentaries. The second disc is a treasure trove of extra stop-motion footage and outakes and documentaries, some test footage of "Taurus" (one of the monsters, specifically the one featured on the DVD cover) and a comical short film called "Zorgon: The H-Bomb Beast from Hell," made in 1971. All in all, this is a Criterion release worth owning!

I was thrilled to finally find this film properly released. I saw this as a kid on the Saturday afternoon, Creature Double Feature show in the mid 1970s and it made an impression on me then. I was unable to find the movie for years afterwards. The only way to see it was as a bootleg (still being sold this way on eBay) or paying big bucks for the briefly released 1980s VHS copy. While this is not a great film, it has a definite charm about it. The story is good and the stop motion effects scenes are quite good. This is a low budget, amateur film with lots of noticeable flaws but still very enjoyable nonetheless. The Criterion release has both versions of the film plus commentaries and interesting artifacts from the production. There are no similarities at all between this film and the 'Evil Dead' so don't let that often mentioned connection scare you away. Both films have a Book Of The Dead, but that's it. Equinox has an actual plot.

Bought this because I was curious

This is kinda like a home movie. It was done by teens and they did a pretty good job of writing producing and directing the movie. Also this copy had two slightly different versions of the movie . Both were good. I bought this movie to have in my bizzare collection of si-fi and horror movies. It was a very low budget flick but done well by the teens that created it. I give it 3 stars.