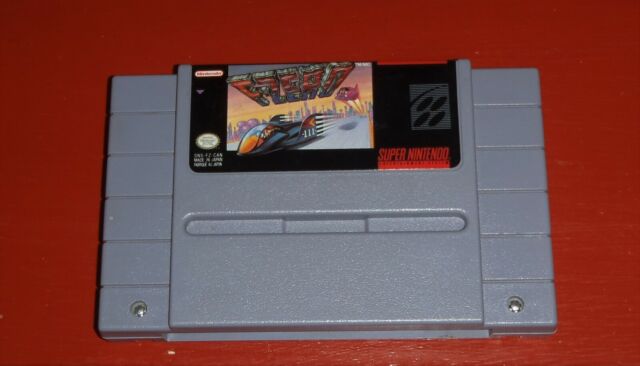 Feedback on our suggestions - Related sponsored items
Report item - opens in a new window or tab
eBay item number:
124519933934
Seller assumes all responsibility for this listing.

This item will ship to United States, but the seller has not specified shipping options. Contact the seller- opens in a new window or tab and request a shipping method to your location.
Shipping cost cannot be calculated. Please enter a valid postal code.
Item location: Boucherville, QC, Canada
Shipping to: Canada, United States
Excludes: Qatar, Saudi Arabia, Morocco, Kuwait, Macedonia
* Estimated delivery dates- opens in a new window or tab include seller's handling time, origin postal code, destination postal code and time of acceptance and will depend on shipping service selected and receipt of cleared payment. Delivery times may vary, especially during peak periods.

F-Zero is a fun game, even if it is no Mario Kart.

F-Zero was a launch game for the SNES and it help show off the systems latest feature it's new mode 7 graphics that could emulate a 3d effect. At the time it was cool and apart from the graphics you have a solid racer. The idea is your in a flying car on a futuristic race track and in order to win you have to come in on the top 3. However there is more to it you also have a life gage and if you run into the wall, other racers, exploding vechicles you take damage. Take too much damage and you blow up and game over. In order to win you will also have to make good use of the boosts you get for completing laps, using these boosts makes your car fast but uncontroblle a wise racer knows the right time. F-zero is a fun racer it has been dwarf in the passing of time by it's successor Super Mario Kart which used the same technology to create the same effect but if your into classic racing games you can't go wrong with F-Zero.

F-Zero for the Super Nintendo is a great, classic racing game. F-Zero features great music and nice graphics (for its time), however, it’s the gameplay that really makes F-Zero so much fun. You control one of four futuristic cars and race through a series of varying, and challenging tracks. Each of the four cars has different strengths and weaknesses. All of the tracks are well designed and some are very difficult. The only flaw that this game has is that there is no two player mode, which would have greatly increase F-Zero’s appeal. Despite the lack of a two player mode, F-Zero is still a great, classic SNES game. Pros: - Fast paced racing game - Variety of interesting tracks - Great music Cons: - No two-player mode

Must have for any vintage game collection

As a game for the SNES, F-Zero is definately a worthwhile addition to any gamer's collection who is interested in the nostalgic and collectible value of vintage video games. Personally, I purchased it as it is one of the foundations of modern racing style games and a perfect example of nostalgic curiousity. While the graphics and gameplay are quite limited compared to today's games, that is something to be expected from a 16 bit system. Super impressive graphics are not a reason to buy this type of game though. It's simplicity and unique charm provides you with a look as to how gaming used to be. Don't go spending more then 10-15 dollars on it at most, but if you can find it for a decent price, it's always good to have copies of all the old classic games of yesterday in your collection. They will only keep getting rarer as the years go by and it's always nice to have a piece of gaming history of your very own.

Most beautiful game i have ever seen

F-zero is one of the coolest Video game series out there. It originally debuted in 1990 with the release of the super nintendo and quickly became a hit. What makes it so cool out of all the reasons? the music. if music were a girl, i'd marry the Music from this game (Especially Silence and White land) thats how awesome it is. also, the graphics. in comparison to the modern games, Sure F-zero's Mode 7 graphics don't stack up, but back in 1990, if you compared mode-7 to the Sega genesis's "Blast Processing" and the Nes's 8-bit graphics, which were getting outdated, then it's pretty obvious what's cool. As for the how fast the game went, the guys who say Sonic was faster than mario should've raced Captain falcon first. The only real drawback to F-zero was that there's no multiplayer. so you can invite a friend over to show him how awesome you are, but can't back it up with a second controller. that sucks. I love the F-zer series and i couldn't call myself a fan if i didn't own this game. It's pretty cheap to pick up here on ebay, and there's a load of copies on sale. so what are you waiting for, go buy or bid on one!

The first time I heard about the F-Zero series was by the Super Smash Brother series. A character by the name of Captain Falcon was from the F-Zero series in which the first F-Zero game I played was F-Zero X which is a great sequel. F-Zero as well as it sequels are racing games but it's without weapons/item (a la Super Mario Kart.) The only thing thing that disappoints me is the character selection. You have a selection of four vehicles, the Blue Falcon (Captain Falcon), the Flame Stingray (Samurai Goroh), the Wild Goose (Pico), and the Golden Fox (Dr. Stewart). However, that does not make the game bad. Each vehicle has their pros and cons and personally, I prefer playing as the Flame Stingray or the Wild Goose. As many other racing games, this game has fifteen courses that you go through but you can play on various skill levels, starting from beginner mode to master mode. In Grand Prix mode, there are three divisions which are Knight, Queen, and King. Each division has five courses each. Your objective is to try to get in first place (of course) but accomplishing that won't be easy. There are various hazards on each track in which you have a power meter. You must avoid hitting the hazards, the sides of the racing track, and of course the other racers. Don't worry though, your power meter can be replenished by driving over flashing lights (this is mostly like a pit stop). Each race has five laps and every time you complete a lap, you can get boost power which will help you go faster, use the A button to use a boost (you can get up to three boost). However, in a Grand Prix race, you must be in a specific position to continue a race. For example, if you're in fifth place in a certain lap, you'll be ranked out. This gets especially tough because you have to be in third place or better in the final lap. If you do get ranked out or destroyed during a race, you can use one of your lives to continue. Once all your lives are used, it's game over. You basically start off with three and you can get more lives every 5,000 points. The better position you are in a race, the more points you can get. Besides the Grand Prix mode, you can also select "Practice" mode which is like time trials. You can go to any track that you have completed in which you can make the best time for each track. F-Zero for the Super Nintendo is a nice start to the series, even though it has limited characters and only fifteen tracks, it is a pretty good racing game. I do recommend this game especially if you're the type of person that likes racing games.