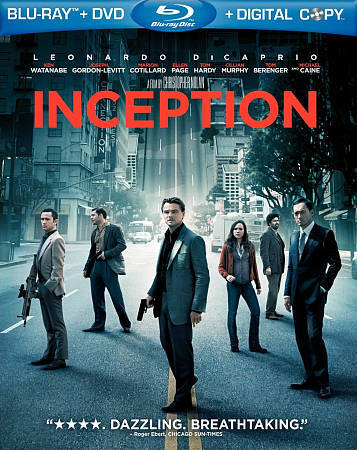 4.7 average based on 124 product ratings

Feedback on our suggestions - Sponsored items from this seller
Report item - opens in a new window or tab
eBay item number:
233221385813
Seller assumes all responsibility for this listing.
Last updated on  Nov 16, 2019 14:26:18 EST  View all revisions

A brilliant movie, but dont count on the digital copy.

First off, the bad. I bought this version for the digital copy, only to receive an illegible code, and a version of the DVD with no digital copy. Attempts to contact WB for support have gone nowhere, as their site freezes (on multiple PCs and Macs) when you request support. Now the good. This movie is absolutely incredible. Inception is defined by brilliant acting, excellent screenwriting, and mind-bending depth; all of which is wrapped in a plot which is perhaps the first original concept to come out of the movie industry in years. Were it not for the digital copy issues, this movie would be a 5/5 without question. Without a doubt, this movie is worth every penny. Even without the DVD version or bonus features, it would still be worth it. Just know that you are buying a DVD and a Blu-ray, and not necessarily a digital copy.

A very dark and twisting movie

Leonardo DiCaprio stars as Dom Cobb, dream thief. He enters your mind while you are asleep and creates the illusion of reality to get what he wants. He is hired to complete the ultimate task, Inception, to plant an idea into someones mind that does not already exist in such a way that the person thinks it was a real idea in the real world. This was a very dark movie with many twists and turns that many may find hard to follow. However if you sick with it, by the end of the movie it will all make sense. I would recommend this movie to anyone who loves to watch a plot unfold and twist to till the very end. Also starring in the move are: Ken Watanabe, Joseph Gordon-Levitt, Marion Cotillard, Ellen Page, Cillian Murphy, Tom Hardy. Dileep Rao, Tom Berenger and Michael Caine

Excellent release. Christopher Nolan continues to be one of the most inventive directors in Hollywood and this film stands as firm testament to that fact. Film is well packaged and packed with plenty of extras with interesting insights into the film making process.

One of my fav movies.

`Inception' is a hard movie to judge. Basically, it is a mind-bender, and as such should be judged by two criteria: How good of a mind-bender is it? And, How much does it create a realm of its own with phenomena and rules of causality that work consistently? In my mind `Inception,' despite some derivative elements, is an inventive movie that provides mind-enveloping reactions well after the viewing is over. Much like Lynch's `Inland Empire' before it, the movie coalesces well into one's imagination and lingers in the mind for days to come. Being brief with the story is difficult, and I'm sure by now you've probably digested a great deal of material elsewhere. Washed up on an Asian seashore, American businessman, Cobb (Di Caprio) meets with an elderly leader to obtain a contract and defeat his enemies. To accomplish this, he offers to perform an "extraction," a means of obtaining secrets from a person`s subconscious during one's dream life. In the midst of their negotiations, an entire village riots and takes over the building where they meet, and Cobb and his sidekick, Arthur, (Gordon-Levitt) fight and flee to save their lives.... In this beginning scene the lines are partially drawn between dreams and awakening, but the surrealistic landscape also provides Nolan ample opportunities to provide his trademark action-adventure for his science fiction saga. Cobb later meets an old professor (Caine) who sagely links him to a prodigy student, Ariadne, (Page) who can assist him with his next assignment and help straighten out his perspective and proper use of inceptions, or the use of subliminal persuasion, participating in another's subconscious perceptions and manipulating them during their dreams. In their first assignment together, he plans to have a rich man's son and heir, Robert Fischer (Murphy) change his mind about his father's will, so he will be able to either obtain or sabotage his inheritance. There are dreams, and there are dreams within dreams, and one of Cobb's plans is to have three levels of dreaming going on at once to have the most persuasive power on Fisher. Intertwined are revelations from Cobb's subconscious, revealed with Ariadne, who joins him on his subliminal journey and witnesses some of his life-changing events with his wife (Cotillard). In a partial revelation, Cobb admits he included his wife in some of his dream work with complications that has created strife in their relationship. As you might imagine, problems develop that make the operation work less neatly and easily as planned, so discerning what level of dreaming and what level of reality are taking place also becomes blurred. The exposition and details are laid out more concretely than Lynch's worlds, but the caveats others have placed about paying attention are well founded. Besides the mood of mind-benders like Lynch's `Mulholland Drive,' Nolan has borrowed and alchemized elements from inventive movies like the truly excellent Japanese anime' adventure `Paprika' and movies like 'The Cell,' but the results are truly new and effective. I have to admit my biases. I love mind-benders, and it's no accident that Christopher Nolan and David Lynch are at the top of my list of favorite directors. This creates a problem because if you love mind-benders as a rule, it is sometimes difficult to separate effective works from those that don't work as well.

For me this movie was worth owning because I enjoy the cast, the script is well written, and the story is multilayered. I appreciate any movie that will leave me thinking long after I've watched it, every time I watch it. In fact, this is 1 of 2 movies I watched again immediately after the credits rolled.(The other Willy Wonka and the Chocolate Factory when I was like, 6). Definitely set aside some quiet time to pay close attention and follow the story. The details matter and if you miss one, you will fail to recognize the masterpiece this movie is. It is visually stimulating with a slight melancholy undertone throughout. Sci-fi as it is, the heartbreak you discover is very real and I imagine incredibly haunting for those who dare to empathize. The twist is carefully, subtly, and painfully folded into the story as opposed to a shocking, brick in the face, sudden exposure that is only entertaining for the first watch. Too, the ending is quite controversial, and has evoked various interpretations. I still have not reconciled my thoughts around it, and I don't mind that perhaps I never will.