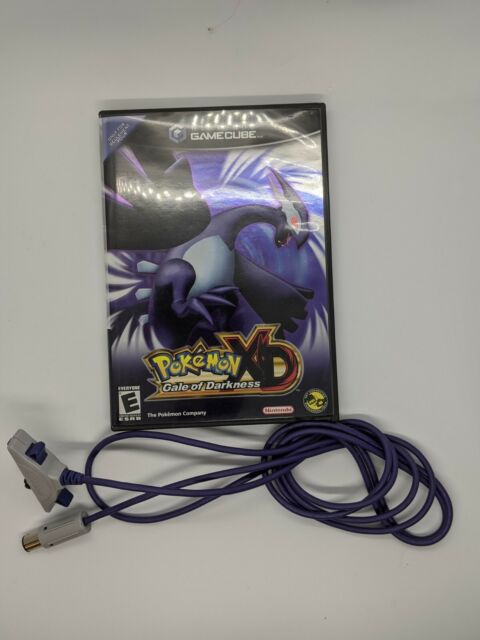 Feedback on our suggestions - Related sponsored items
Report item - opens in a new window or tab
eBay item number:
184545284443
Seller assumes all responsibility for this listing.

This item will ship to United States, but the seller has not specified shipping options. Contact the seller- opens in a new window or tab and request a shipping method to your location.
Shipping cost cannot be calculated. Please enter a valid postal code.
Item location: Sudbury, Ontario, Canada
Shipping to: Worldwide
Excludes: Qatar, Saudi Arabia, Morocco, Kuwait, Macedonia
* Estimated delivery dates- opens in a new window or tab include seller's handling time, origin postal code, destination postal code and time of acceptance and will depend on shipping service selected and receipt of cleared payment. Delivery times may vary, especially during peak periods.

Pokemon XD is the sequel to the famous Pokemon Colosseum for the Nintendo Gamecube. The game is a pretty good MMO RPG with the same feel as its predecessor. You begin in Pokemon HQ with a faithful Eevee and go through the game snagging Pokemon with closed hearts. There are a few pros and cons associated with the gameplay and overall game quality. Cons: The game is very slow moving in the beginning. This is very similar to Pokemon Colosseum. There is a theatrical beginning that is fairly quick and painless, but the beginning gameplay is pretty slow. You start out in a very simple battle in the beginning using a very awesome Pokemon, but this leaves you disappointed due to the simplicity of defeating your foe. The graphics in this game are the same as Pokemon Coloseum, nothing to write home about. However the Nintendo classic hexagonal look and feel seems to be a charming trend in Nintendo titles and I personally have no problem with them. Pros: The beginning is very long, but if you are unfamiliar with Pokemon game controls this is a good option to play through. You are also offered a checkpoint in Pokemon HQ that allows very full and detailed instructions on how to play through the game and how to battle efficiently. This is similar to the TV option in Pokemon Diamond and Pearl except you play through the questions you need answered. If you are a Pokemon Master there is no reason to use this option, but it is a great way the developers utilized to include even the most Poke novices to be taught the Pokemon basics required for Master status. The game also incorporates the Battle Colosseums so beloved in the predecessor title. This gives a nostalgic effect to the game and allows for your Pokemon to grow in level and earn you a little cash. The most important difference in this game is the wild Pokemon option. There are sites in which you can bait, battle, and catch wild Pokemon. This allows the game to stray from the snagging technique as your only option for catching and using Pokemon. Overal I like the gameplay, the characters, and the Pokemon found in the game. I think it is a must try for all Pokemon veterans and a good way for Pokemon newbees to get their foot in the door to Pokemon gameplay. Jessi De Santis 9/20/10

Maybe it was just me, but when I found out there was going to be a Pokemon game for nintendo gamecube, and that it was not going to be like 2 other pokemon games for non-handheld consoles (Pokemon Snap, and one I forget the name but you had to find the clips to a movie, blah blah..boring!!)I was elated! I will admit, the handheld pokemon games for Gamecube Color, and Gameboy Advanced, are awesomely addictive games! So the aspect of this type of game coming to Nintendo Gamecube was extremely exciting! I did not buy the game immediatly, because one, I am not a major video game player, I usually play when my younger cousins are visiting and we play games like super smash brothers melee. My youngest cousin has recently become a major pokemon fan (I swear his brain is a pokedex in its own). His love for pokemon brought me back to when I liked them (when they first came out) He told me he had been saving up to buy Pokemon XD and I told him if he paid at least 20 I woul buy it. Alas that is how this great game came into my hands. Now, I 1-player mode or Story, mode, is based on a young hero, who is a great and well known trainer amognst the vibrant set of charachtrs in the Pokemon HQ lab. Its known from the start that you must be the hero of Orre land by defeating Cipher, the evil thugs who higjack the S.S. Libra full of pokemon! While closing the hearts Cipher is also creating the strongest anf most evil shadow pokemon XD011 (shadow Lugia). The game is simply laid out, and while people wrote walkthrouhs and whatnot, is really isnt a very complicated game, especially if you are familar with the pokemon handheld games from gameboy advamced amd Gameboy color. While the handheld games (Round 1: red, blue, yellow,) (Round 2: Gold, Silver Crystal) (Round 3: Ruby, Saphirre. Emarald) All fo those nine games have similarites also way different, which is why i love these games so much! Upon getting XD I found it was not exactly what I was expectimg, but it is very fun, You get the chance to own somevery cool legedary Pokemon like Lugia, Articuno, Moltres, Arcanine, and more!! Still after the Story is complete it is years later in game tme o every one you fight wil have a 40+ level. Tham after you been Eagin's 2 Pichus, 2 p:kachu's, and Raichu's. He will tham shpw ypu the Orre collesieum. I reccomend having 1 pokemon way over level 70 (youw first challanger has level 70 pokemoon. I have not beeten the first challager as of this review to see what goes on next, but I have heard Rumors rhat after beating all of orre chalangers, other Rarer pokemon come to the 3 poke spots, bit be sure to have them fully loaded because the rarer pokemon tend to eat the faster, and when the Miror B radar does off he will eithier be at one of the Poke spots. Once he has run out of the shadow pokemon you lost, tha will run away cowardly and the radar will eventtually go off again and this time if you think you have gotten all missed shadow pokemonn rom him than go to the Gateon Port Light House, take the elevator You should find him there and you will battle again, only this time he has a dark dragonite! VS mode, The Majror downside to tha game does not let you select what pokemon you w or unless yoy have the PC cord to transfere pokemon amd having the wireless thing is the only way for up t 4 players, In RefiarD

This game follows a whole different story than what we're used to in the Pokemon series. Fighting and only being able to catch "shadow pokemon" make it a fun and unique twist. Also, as far as I know, there aren't any realy gyms or gym leaders (but I haven't really played too much of the game). I can see why it's one of the more sought after Pokemon games in the market.

I bought Pokemon XD because it's the only Pokemon RPG on a console game system. XD has a great story arc for it's time and an unusual quirk in the capture system-snagging the antagonist's shadow pokemon as well as almost always fighting with two pokemon, making things interesting. Originally I bought this around the time of it's original release, only selling it to buy a game a really wanted at the time. Pokemon XD is a hard game to find, so if you can find a copy for a realistic amount, don't hesitate! If a pokemon fan, you'll enjoy this game.

Had Colosseum as a kid, never beat it. Purchased it a few months ago, beat it, and wanted to play the sequel. A bit more pricey, but I've had a great time playing XD so far. Would definitely recommend.