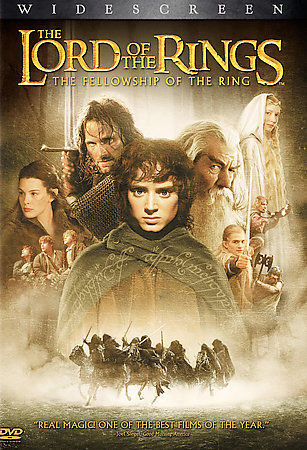 eBay Money Back Guarantee
Get the item you ordered or get your money back. Learn more - opens in new window or tab

4.8 average based on 105 product ratings

Feedback on our suggestions - Related sponsored items
Report item - opens in a new window or tab
eBay item number:
133346394276
Seller assumes all responsibility for this listing.

This item will ship to United States, but the seller has not specified shipping options. Contact the seller- opens in a new window or tab and request a shipping method to your location.
Shipping cost cannot be calculated. Please enter a valid postal code.
Item location: Reading, Pennsylvania, United States
Shipping to: United States

Lord of the Rings Trilogy

Personally I was not really into any of the books or stories that the movies spawned from, so I cant really compare how well the story adapted from print to screen. I can however recommend this trilogy to anyone who wants to demonstrate or show off their Home AV system. I have a 50" Samsung DLP with an Onkyo 600 reciever powering four Bose double cubes and a Klipsch Center channel the Bass comes via a Sony Dual 10" push/pull subwoofer. All 3 movies look beautiful very good transfer quality and the sound is Mindboggling. If you can spare a Sunday get the family together pop some popcorn and watch this trilogy, My family has done this with the Indiana Jones trilogy on a rainy day and it was great. Very good adventure films, if you are willing to really get into it.

fellowship of the ring

An impressive effort is seen in Peter Jackson's first of three films dedicated to J.R.R. Tolkien's Lord of the Rings. Great acting as well as gripping special effects, not to mention the attention to visual detail, down to the smallest things, might lead you to believe that I would give this a perfect rating. I give it a good rating because of a couple of things. Though, I am probably too picky, sometimes. First off, I am a huge fan of the books, therefore, I may have been expecting a bit too much when I walked into the theater. Many things have changed from Tolkien's original to what is seen in the film. Certain characters are given lines that others had in the books and even some changing of a characters mission (as seen in Arwen's character at the river), but all that aside, it is much better constructed fundamentally than almost anything else of the same genre. I give it an A for effort, but not an A+. Still, pick it up, as the next two films got the 5/5 I was hoping I would give them. Thanks for reading, feedback would be appreciated. signed:CLW P.S. Read the books first!

LORD OF THE RINGS: TRILOGY, A" Must-Have" Collection!

Most of the movies that were adapted from novels nowadays do not really stay faithful to the book itself. Some even alter entire stories completely. It is not surprising when fans are utterly disappointed and walk out of theaters angry. And that’s the trend. No matter how big the budget is or how “cool” the digital effects are, it actually all boils down to the story. And that’s it. However, once in a while, a great film based on a book comes out. This century, that film is J.R.R Tolkien’s “Lord of the Rings”, the story that arguably started the fantasy myth of heroes, elves and other races. Directed by Peter Jackson, the film, hands down, has been very faithful to what LotR fans has come to love and cherish for several decades. Yet, on another perspective, people who know nothing about the book will be able to understand and appreciate the movie version. And when they read the books, like what most people do after watching film adaptations, they wouldn't be confused on the events that unfold. Instead, they would say, “Ah, I saw this part….” On to the film proper, LotR started with Fellowship of the Ring; followed by The Two Towers and was ended by The Return of the King. The first movie, Fellowship of the Ring, introduces us to the characters and the story as a whole. The second one, The Two Towers, builds up tension of the story and gives the audience a clue on what can be expected on the next movie. The last one, Return of the King, hits the climax of the story and gives audiences a breather during the ending. All throughout these three films, the cinematic's, digital effects and sounds are superb. Peter Jackson and the team did an excellent job of setting the right ambiance and mood. The characters each have their own shining moment in which the actors portrayed them excellently. Believe me, this is one movie you don't want to miss.

It took decades to bring these books to the screen. It was worth it! It's hard to find fault with anything; though I guess they could have shortened the tun time. Actually they did cut some scenes, so never mind-5 stars.

The Legend Comes to Life

The story, sets, costumes & FX are so rich, you'll have to see the film several times to absorb everything. The unspoiled New Zealand locales are spectacular, providing a variety of environments to represent the different settings on the characters' journey. The location sets are imaginative, detailed & weathered, adding to their believability, while the studio sets match them in meticulousness. The costumes are at once familiar & strange, drawing on both the medievil & the fantastic, but more important, they're also functional & practical. The music by Howard Shore is appropriately sweeping, Celtic & folky in keeping with the novel, although it lacks the memorable themes of John Williams or Jerry Goldsmith, but neither would commit a year or more to a 3 picture project. The FX are as they should be, unobtrusive & unnoticed most of the time, there only to support the story not draw attention away from it as in most Hollywood movies which try to coverup illogical plots & bad acting. I'm particularly gratified by the casting of Viggo Mortenson as Aragorn which was a last minute stroke of luck when the actor first chosen for the part backed out due to differences with the director. I've always thought Mortenson had an intensity & striking but not pretty-boy looks that could portray a flawed, dangerous hero instead of the villains Hollywood always picked him for. A stellar cast giving some of their best performances, visuals that deliver beyond what I imagined, a perfect mix of humor, passion & tragedy, and a feeling of grandeur, scope & impending doom. Perhaps as an ensemble piece with so many characters & the inability to concentrate on any one, it can't be measured against some of the classic character study films, but even the casual moviegoer can grasp the ideas & not get lost As far as I'm concerned, it's one of the greatest films of all time.