I ordered this charger because the radio was not equipped with the charging Status Light. This charger can be powered by 120V AC outlet, or by a 5V Dc adaptor via Male - Male USB cable plugged to the USB port. This solved the problem using the charger in my car. The charging...Read full review

I ordered this charger because the radio was not equipped with the charging Status Light. This charger can be powered by 120V AC outlet, or by a 5V Dc adaptor via Male - Male USB cable plugged to the USB port. This solved the problem using the charger in my car. The charging status light Red In Charge and Blue Fully Charged, indicating the charging status, solved my problem. This can make a full 4.2 V charge without overcharging, increasing the performance of BL-5C Li-ion 3.7 V batteries. Thank You 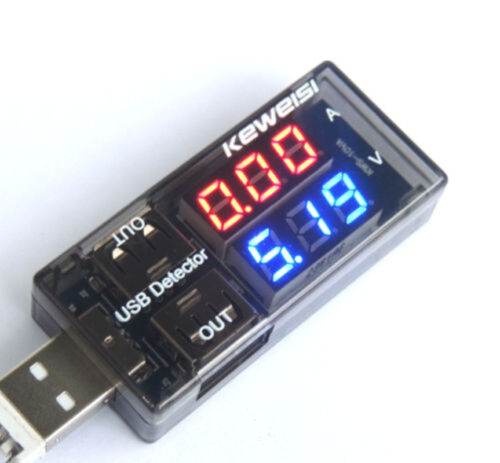 It is a must if you power up voltage to sensitive devices.

I'm using to check 5V 1A USB power supply. If the voltage is above 5V create noise to security cameras, but if it is bellow 5V affect the security camera performance.

Math learning for a toddler +2 starts with numbers 1, 2, and 3. After he can go to 1, 2, 3, 4, 5 using the fingers of one hand, and small rubber balls 1 red, 2 blue and 2 yellow. This way he creates the concept of 3 primary colors RED, BLUE, YELLOW and later 3 more secondary colors Red +Yellow = ORANGE and Yellow + Blue = Green. So he is going simultaneously through 2 processes. Recognizing Numbers (Decoding), and creating the math concept on numbers. For example 1 + 1 = 2. One dog + one dog = 2 dogs. Meantime he starts very primitive concept of increasing of the value. Arithmetic Progression. If a child is able to recognize the numbers from 1 to 9 this is the first solid step. 0 it is a new concept that comes later. Putting 0 in the front is confusing, for a beginner. We solved the problem throwing away 0 and telling him this is a place for the letter O. My opinion is that the zero is confusing, because to create a concept for the zero the toddler may be advanced in recognizing numbers from 1 to 9 using his fingers too, and then this toy isn’t needed anymore. At least the zero should be placed on the end. Keep in mind this learning toy is for recognizing the shape of the number (Decoding) and not for learning (bigger or smaller), which is another more complicated step, using different learning toys.