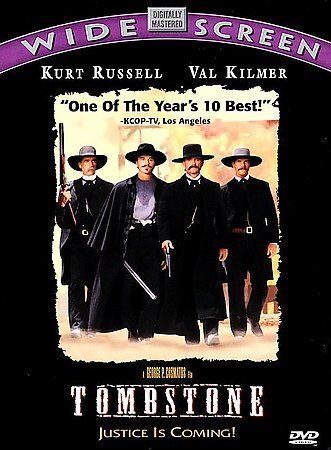 Tombstone has every element that would make it a great movie, probably one of the best Westerns in recent memory, but a few unnecessary side stories and characters too many weaken the overall effect. Of course, it's a Hollywood-ized tale based on the legendary true ...Read full review

Tombstone has every element that would make it a great movie, probably one of the best Westerns in recent memory, but a few unnecessary side stories and characters too many weaken the overall effect. Of course, it's a Hollywood-ized tale based on the legendary true story of Wyatt Earp (Russell, Big Trouble in Little China), a former lawman who moves with his three brothers out to Tombstone, AZ, in order to settle down and (hopefully) make themselves a small fortune. However, they didn't realize that the town they were living is actually run by a powerful gang known as the "Cowboys," who have strong-armed their will, and struck fear in the hearts of the local sheriff and his clan. Tensions between the brothers and the Cowboys escalate when the former lawmen can't just sit idly by while crimes against humanity are being committed, resulting in a deadly feud that won't cease until one side is wiped out by the other. While the story deals with Earp and his quest to bring justice to Tombstone, it is a dynamite action-drama that starts with a slow simmer until it threatens to boil over with excitement. The friendship between Wyatt Earp and Doc Holliday is also remarkably well-handled, with Val Kilmer (True Romance, Top Gun) stealing scenes with every frame he's in. However, it doesn't all work. Tombstone is weakened by a sappy romantic subplot that persists in re-emerging, presumably to allow for a happy ending. Trouble is, there are already four endings to this story as presented, and the makers have chosen the weakest one to ride out on. By removing this and a few straggling characters here and there, what you'd be left with is a near-perfect example of classic Western filmmaking. But I'm quibbling here, since Tombstone is still quite an engaging piece of entertainment, and even if the symbolism is heavy-handed and the themes are simplistically presented, the stage has still been set for a riveting showdown. It's well-developed Western fare for those who have a soft spot for all Hollywood oaters, no matter how glossy and glamorized it may be. It's a mechanical form of filmmaking, but this machine is unquestionably well-oiled.